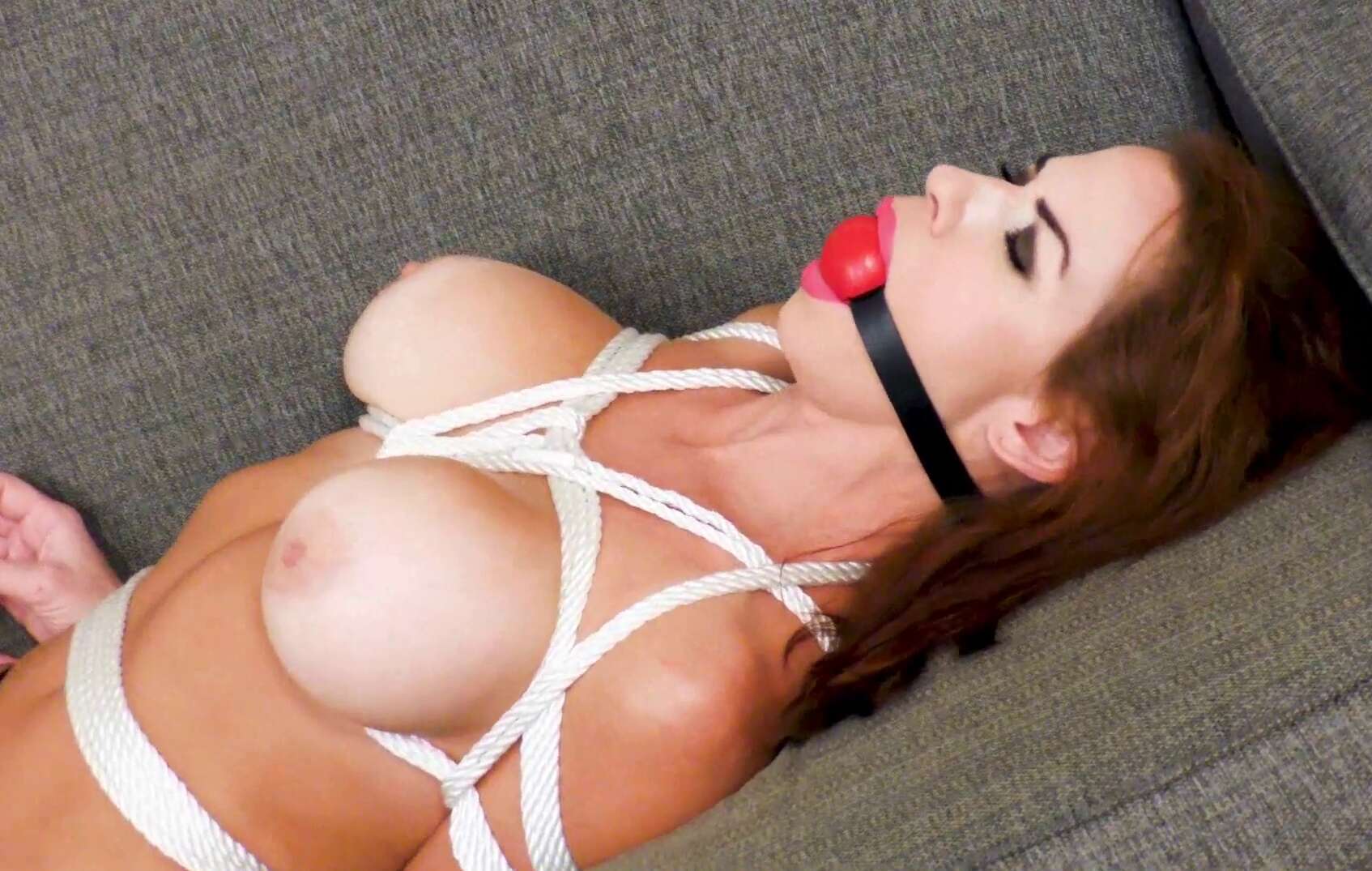 Now you can thrill to this amazing bondage fantasy at a greatly reduced price! The pulse-pounding first season of “Stop Alexis Taylor!” continues with more highlights of busty journalist’s bondage-filled adventures as she tries to locate her missing twin sister. As the story picks up, Alexis seeks the famous movie star and international spy Mary Jane Green (last seen in the clutches of the wicked Colonel Jackman). Instead, the plucky reporter is confronted by a mysterious ninja, and a battle ensues! Alexis (dressed in pantyhose, heels and a snug-fitting skirt and top) nearly escapes, but she’s captured by the dark villain and tied standing with her arms held wide apart. He cleavegags the stunning brunette and exposes her considerable breasts, then leaves her to struggle and to be found by his shadowy master.

Meanwhile in Los Angeles, mystery writer Ms. Purple has apprehended and handcuffed Chi Chi Medina, caught trespassing in Alexis’ apartment. The stunning Latina (in a short, low-cut dress and open-toed heels) claims she’s only looking after the place while the reporter is out of town, but the crimebusting writer isn’t buying her story. The gorgeous brunette finally does confess she’s working for someone else, and she’s cleavegagged and thoroughly locked up in handcuffs and leg-irons while they wait for the authorities to collect the devious beauty.

At Colonel Jackman’s estate, Mary Jane Green (in a silky retro-style gown and barefoot) is still being held hostage by the cheesy villain. When she stubbornly refuses to surrender the information he craves, the classic blonde beauty is chair-tied, detective-gagged and left in a dire dilemma. With a powerful variable-speed vibrator secured between her legs, the Colonel places a monstrous “Goliath Bee” on her thigh. He explains that if she finds the correct frequency it will destroy the mutant insect, but the wrong frequency will cause him to give her a potent sting she won’t survive! The captive spy has no choice but to play his evil game, yet she can’t resist the ineluctable hum of the device, and Mary Jane succumbs to a helpless orgasm. But will she be able to vanquish the dangerous bee?

The perils of Alexis continue as the buxom reporter has one too many and falls into another trap. Our brave damsel is ballgagged and post-tied in her black heels and short red dress, then Ms. Taylor’s unknown captors strip her down to her panties and heels, and she’s roped into a classic tie on the sofa. What do these bad guys wants from her? And will she ever be able to escape from their clutches?
Back at Alexis’ apartment in Los Angeles, poor Chi Chi Medina has been taken captive again — this time by Colonel Jackman! The master villain discovered the petite beauty was actually a double agent, leaking the details of his master plan to federal agents. Chi Chi is stripped down to her bra and panties, ballgagged, hogtied and left in a desperate predicament. Left alone, the barefoot babe energetically struggles against her bonds in a frantic attempt to free herself before it’s too late. But the restraints all hold tight. Is this sexy operative doomed?…