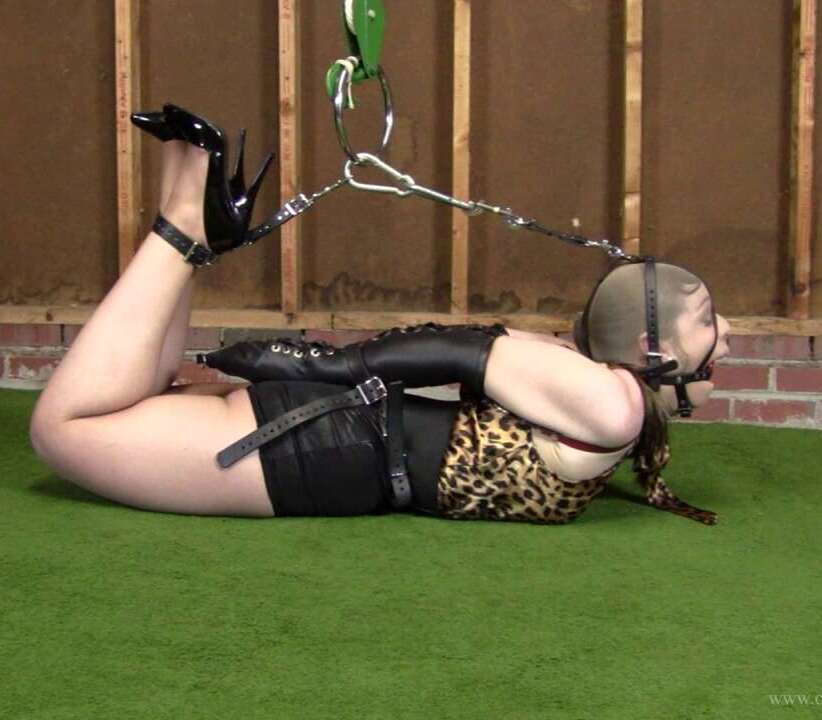 Mr. Big Boss had meetings all day long they kept him locked in a boring conference room with no eye candy. He kept thinking about the sexy little outfit Elizabeth had on that morning. He imagined her walking around the office, her ass shimming in the tight skirt. Her mini skirt rose higher on her thighs as she walked around the office doing errands and checking on her secretaries. Before long the Boss was thinking about the things he could be doing to her instead of sitting in this boring meeting….

Elizabeth was waiting on him in the warehouse. She was wearing a leopard print top, wide leather belt, a really short tight black mini skirt and black patent pumps. Mr. Big Boss picked up a leather arm binder and slid her arms into the soft leather. He laced her arms tightly together but before he could attach the yoke, his hands found themselves grabbing her luscious ass.

After a few minutes of fondling, Mr Big Boss pulled a nylon stocking over her head. He then strapped on a ring gag head harness over top of the stocking hood. He rubbed his finger over her gagged lips and the nylon covering her open mouth. He told her to get on her knees and Elizabeth did as he said. She wiggled her ass back and forth as he strapped her ankles tightly together with a leather strap. The Boss then lifted her skirt up and slapped in between her legs, making her wince behind the gag. Once he was done inflicting pain, he laid her down on her stomach on the hard floor.

She seductively wiggled in her bondage as she waited for her Boss to apply more straps. Upon her request to make her bondage tighter, he added a leather strap around her waist, that cinched her arms tighter to her body. He then cinched another leather strap around the waist strap, making everything much tighter. Her breathing became more shallow as the leather waist straps made it harder to breathe. The Boss added some small leather straps to her ankles and the ring of her head harness. He then connected the two pieces with carabiners. The hogtie strap lifted Elizabeth’s upper body and her knees off the floor. Her ring gag was pulled deeper into her mouth, while the leather straps dug into her face. The Boss decided to ramp up the difficulty. He added another hook to the metal ring that he had lowered right above her. Mr. Big Boss connected the large carabiner to the metal ring and then he started hoisting it up in the air. With each pull her legs were brought higher off the ground, her back arched more, and the head was pulled backwards. Elizabeth’s breathing deepened as she endured the incredibly tight hogtie. 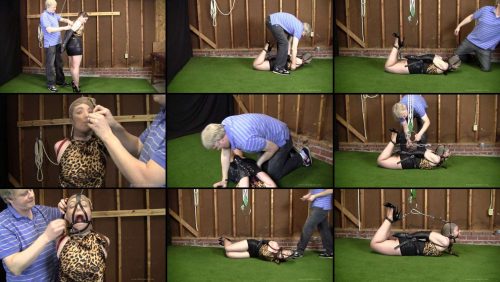