Chrissy is hanging out on the couch at her place with her friend Ashley when she mentions her feet are getting cold so she’s going to go grab a pair of socks. Ashley says her feet are cold too and asks to borrow a pair. As Chrissy goes off to get the socks Ashley also asks if she can use her laptop and Chrissy tells her to go ahead. While Chrissy is away Ashley clicks on a folder that was minimized and finds a bunch of bondage pictures. She’s surprised to when Chrissy returns she says “Wow, I didn’t know that you and your boyfriend were so kinky?” Chrissy is confused by the comment. “What are you talking about?” she asks.

Turns out the laptop belongs to Chrissy’s boyfriend and he accidentally left it behind. Ashley shows Chrissy what she found and Chrissy is shocked. I’ve been seeing this guy for over a month and he’s never mentioned his bondage to me? Why would he hide something like that from me?” Ashley tells Chrissy to relax and explains that he is probably just too shy or embarrassed to bring it up. Then she asks Chrissy is she’s ever tried it before. “No, have you?” she responds. Ashley tells her she has and goes on to explain it was a lot of fun and she really enjoyed letting go of the control and the feeling of being vulnerable. Ashley offers to tie Chrissy up so she can experience it for herself… 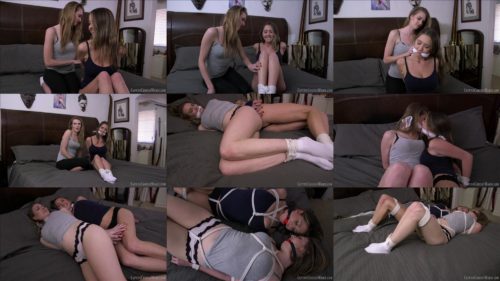 Metal bondage - Gotcuffs Adara meets a new guard part 4 of 4 - Prison bondage
Conny willingly lets you put on the necklace and chain it - Conny on the chain 2 - Everything is lo...
Rope bondage - Annabelle is tied up with rope – The bimbo brat has me all tied up!
Rope bondage - The best bondage models - Insex crew vs. BoundCon models Katarina Blade and Muriel - ...
Lesbin Bondage - Lesbians fuck the blonde bimbo Adara Jordin into submission - Bondage sadistic fun ...
Outdoor bondage - Mau and Bagira are bound and funny - Wet fun -handcuffs bondage
Metal bondage - Jasmine Sinclair and Faye are chained to the wall with metal cuffs – Slave Vs Slave
Tape bondage - The super sexy Raven Eve is tied to the post by cuffs and black tape- Female bondage