David has a cheerleader he’s lured into the area for an interview with a cheerleading magazine but unfortunately for Lizz he’s really just got another person and a ton of rope waiting on her. David grabs Lizz and holds her arms behind her back to make it easier for his cohort Dominic to bind her arms tightly. She won’t go down without a fight and thrusts and moves herself around to no avail as soon she finds herself tightly bound. Taken to the ground Dominic quickly grabs some rope and binds her knees tightly while David starts messing with her white cotton panty clad ass.

Dominic rolls out more rope in front of poor Lizz’s eyes and uses it to bind her ankles tightly next. Confident that Lizz is tightly bound Dominic grabs some white cloth and stuffs it into her mouth following up with a nice silver tape wrap around her head holding the gag in place and silencing her cries. Next Lizz is rolled over and put into a very tight hogtie. Confident that she’s handled David moves on to get his next victim. Forcing Serene into the room next she’s worried that her teammate is bound and gagged on the floor and soon finds herself being groped and grabbed and bound just as tightly. First her wrists and elbows then Dominic moves down to her ankles and thighs as David grabs her tightly by the ponytail holding her head up while Lizz struggles mightily in the foreground. Serene finds herself faced with the same mouth packing and silver tape wrap sealing the gag and her muffled cries in.

With the gag done Serene is moved and hogtied tightly beside her teammate and with a few parting swats David and Dominic go out to grab the van and the boxes that they’ll be transporting their new captured cheerleader cargo in. 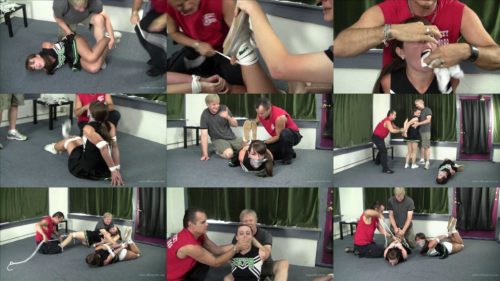