Hannah is married to a very rich man and is not used to being told what to do. But when some man grabbed her and took her to an abandoned basement, she was not about to start taking orders. She refuses to sit down and at one point, makes a break for the door. She doesn’t get far as the man stops her and brings her back to the middle of the room. This time, he is not going to be nice. He roughly pulls off her dress and removes her bra. But Hannah still doesn’t have any plans to cooperate. So he makes her sit on a chair and starts tying her up.

Hannah continues to be uncooperative and mouthy. It soon becomes obvious that the man is going to have to show her that he is serious. So he pulls her panties off and then after tying her ankles together, he stuffs her panties in her mouth. He then wraps tape around her face and over her mouth to gag her. Hannah is furious as the man finishes tying her up. She grunts and whimpers loud through the gag, but the man could care less what she has to say.

Finally before he leaves her, the man puts Hannah in a very tight and strict hogtie. This includes tying her elbows together tightly. Now as Hannah lays there tied up, gagged and completely naked except for a her garters and nylons, she thinks to herself that maybe she should have been a little more cooperative. 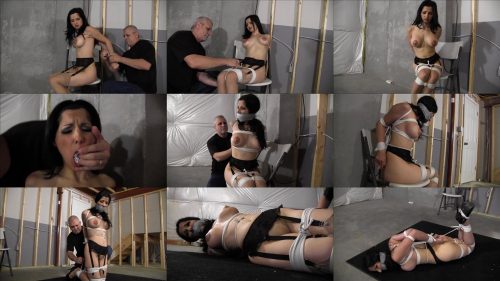