He thought he was getting away clean. But as soon as he stepped outside, there was lady waiting for him. Her name was Sahrye and she was the nosy lady who lived next door. Knowing the residents of the house were out of town, she told the man that she was going to call the authorities. But he got Sahrye to believe that the home owners had come home from their vacation early and were inside.

He told her that he could show her if she would follow him back inside. But Sahrye was soon going to find out that he was not telling the truth. Because once they were inside, he grabbed her and tied her up. Then to keep the nosey neighbor lady from crying out, he stuffed a pair of panties in her mouth. When he worried that one pair was not enough to muffle her, he shoved another pair in and then wrapped tape around her face and mouth to gag her.

Sahrye struggled hard to get loose, But the rope was tied painfully tight and she soon realized there was no way she was getting away. And with her mouth packed full of panties, she also knew that there was no way anyone outside would ever hear her. Later before the man made his get away, he came back and put her on her knees. Using more rope, he fastened rope to her neck and ankles and connected her to the wood framing of the room. Then after re-stuffing her mouth and tying a cleave gag between her teeth, he left Sahrye as he made his escape. Lucky for her, the home owners would come home early. But that was going to be hours from now. 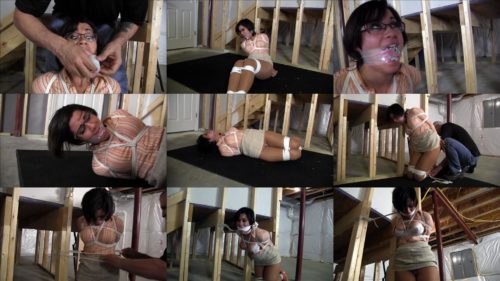