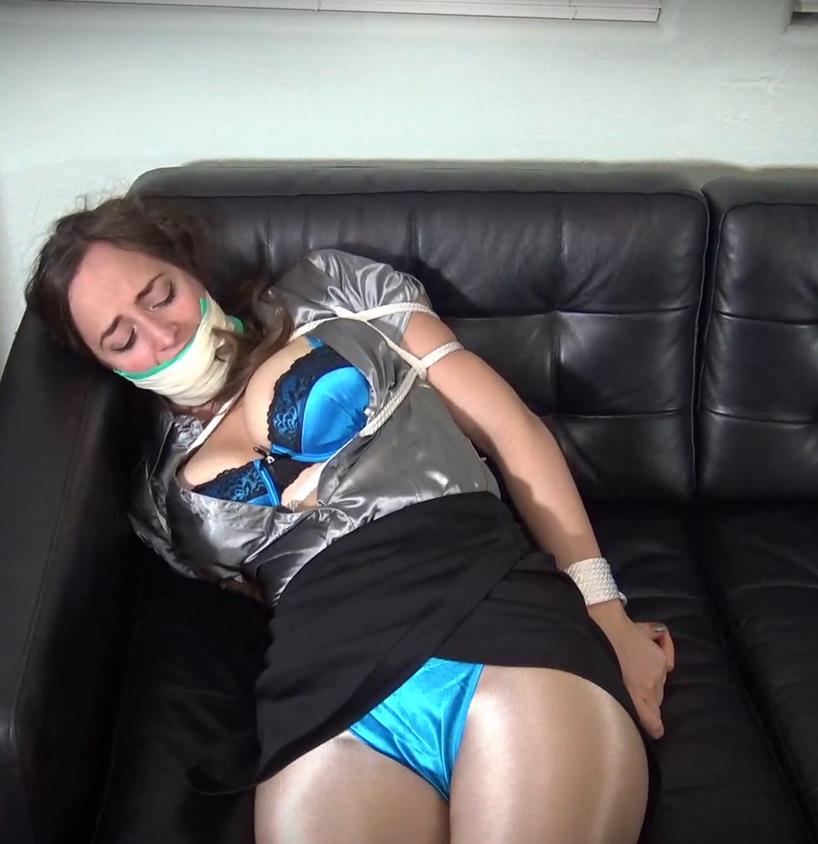 Karly waits anxiously for her boyfriend to get home from work. She has been watching a show on TV where a girl gets tied up and it got her a little excited to try it herself. She goes to the garage and gets some rope and sits on the couch waiting. When he gets home she lets him know that she has been curious for a while and would really like to try it out, so he obliges…

Karly stands and unbuttons her satin blouse, revealing her sexy bra underneath. She turns around and puts her hands behind her back and tells him she’s ready with a big excited smile. He ties her wrists and she gives them a few twists and tugs.

“Wow, this is pretty good. Have you done this before? Well, there’s some more rope right behind you..”

Karly’s boyfriend smiles and picks up the ropee. The next thing Karly knows is that she is tied up extremely tight.. Her ankles, knees and torso are all bound up and she can barely move without it hurting.

“Ok… I think this is enough.. You tied this really extremely tight.. I didn’t know it was going to be like this..” Before Karly can say too much more, her boyfriend stuffs a sponge ball into her mouth, wraps her face with vet wrap, and then finishes it with some microfoam tape.

Karly tries to yell at him and tell him to untie her, but he smiles and reminds her that this was all her idea in the first place. She flops around and struggles, trying her best to escape, in between yelling at him through her gag.

Finally, after several minutes, he ungags her and begins to untie her. As soon as she spits the packing out of her mouth, so goes off on him! (Which is really awesome and funny BTW)… 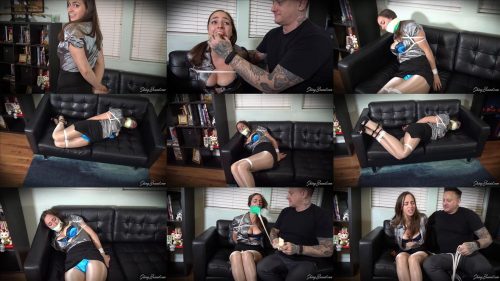 Blonde Katsya is texting while handcuffed - Cutie spend time in metal restraints - Metal bondage ...
Sensually struggle - Reagan Lush bound up with duct tape - Tape Bondage – Seductive tease tormenting...
Juliette is preparied to be the human cow - Leather Bondage, Slavegirl is bonded and gagged
The not so great - Constance is a magician - Constance is s straitjacketed ... She is the Great in...
Self bondage -Restrainedelegance Bad Dolly’s tie herself with the ropes, tying a crotch-rope karada ...
A Golden Girl Natalia Forrest - Rope bondage - Gold rope - Bondage compliment
Restrainede legance Ariel’s fantasy - Ariel is imprisoned, tied, gagged, blindfolded in bondage sto...
Boundhoneys - Jasmine Sinclair to be tied up tight with rope- “Tie Me Up and FUCK ME!!” - Strict bo...