Nicole is on the telephone telling her friend about her Internet date tonight. The friend is skeptical and worried for Nicole. But Nicole tells her not to fear. “What could possibly happen to me!” Nicole tells her just before she hangs up. But hours later, Nicole isn’t so sure anymore. Because she finds herself all tied up with a huge ball wedged in her mouth to gag her. Right about now, she is probably wishing that she had heeded her friends warning. Nicole struggles hard on the bed, tightly bound and gagged in her tight jeans. Later her bra will be pulled down so her big boobs are free to bounce around as she rolls around on the bed. 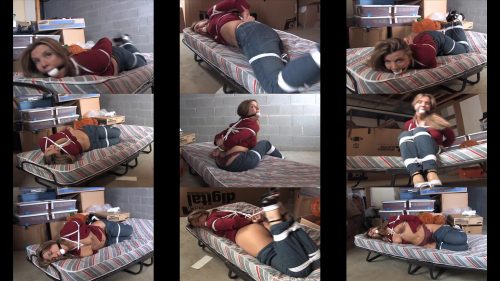