Raven hair pin up model Nyxon is dressed in a white vintage corselette and stockings with shiny stiletto boots. She awakens totally tied up to a chair and immediately knows it was you her creepy younger brother that put her in this predicament. Nyxon is really angry and curses him as she looks up to see you’re wearing her boots. She’s furious that you didn’t ask permission to wear her boots and she struggles so hard that the knee rope loosens and becomes untied. The ropes on her tightly bound elbows and chest and ankles don’t budge at all and Nyxon is getting madder and madder as her helpless struggles are getting her nowhere .. You comply and untie her but the next thing the tattooed MILF realizes she’s now bound on the floor with a big ballgag stuffed into her mouth. You’re pleased she can no longer curse you and you take a seat on the couch enjoying your bitchy older sister struggling helplessly in the super tight bondage. 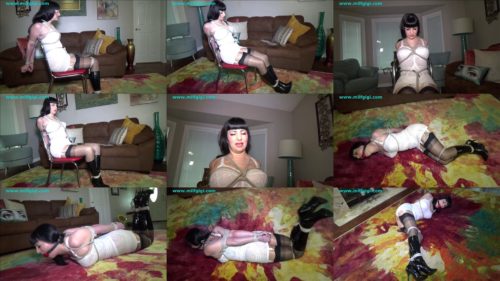 Dina bound nice and tight with ropes - Boots bondage adventure
Lovely Cameron Dee is hogtied in Lingerie with ropes - Rope bondage
Lauren Phillips rope bondage.. The Magic Lamp - To be tied up
Metal bondage - Caged Grace Montana with mouth spreader - Other bondage
Hogtied on the bed - Paula is tightly hogtied with ropes and wearing pair of Dr Martens boots - R...
Alex Coal loves to be tied down and helpless - The Game Part 1 of 3 - Self Bondage
Naked slavegirl and crucified at a tree - Punished her body
Female selfbondage by Anita De Bauch likes using clothes pegs, naked Elctro BDSM riding on the Span...