The Duke recently created quite a stir in Parliament when he declared an Independence day for himself and all of his estate. Popular opinion is that he’s mad – but the people seem to like him. Every major news network wants to be the first to present the full story, but not very many reporters are being granted access. But cub news woman Chloe Toy has been granted access through the first stage, and admitted to the estate. But now she has been pulled aside by security!

The guard informs her that under the new regime, certain items are considered contraband as the Duke has banned them from the Ducal estates. She’s now in foreign territory and must obey the laws like everybody else. Shoes, for example. Women are not permitted shoes within the boundaries of the Duke’s estate. She’s going to have to take them off, they will be confiscated for the duration of her stay. And is that a bra he spots beneath her blouse?

Blouses are permitted but bras are contraband. She’s forced to stip off – and when the guard spots that she’s wearing panties, of course, she’s forced to remove that newly-illegal item of clothing, too. She is left almost naked- just in her fully-fashioned stockings and suspender belt. The guard isn’t sure of the Duke’s position on those – he has to go and seek a ruling from the Duke.

He locks Chloe in Irish Eight cuffs while he clarifies the matter. Left on her own in handcuffs, stripped almost naked, Chloe starts to question her life choices! But no, if she wants to be a star reporter, she has to stick with it, get the story! After all it isn’t like she’s being shot at in a war zone or anything 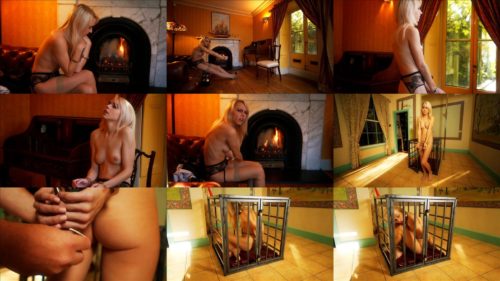 Foxy Menagerie Verre cuffed to a post – You absolutely can not work here
Serious trouble for prisonteens Violet and Daisy. Girls put leg iron,leg shackles,metal cuffs on – N...
Ariel Anderssen is arrested at a hotel - Put handcuffs on - Part 1 of 3
Metal Bondage - Rachel Adams is hogcuffed on the ground - In the dungeon - Part 3 of 3 - The end
Handcuffs bondage - Anastasia and Ramona – Play with me 1 - Self bondage
Dakkota was arrested and got cuffs at a brothel Part 1 - Metal bondage with hand cuffs
Prison bondage - Gotcuffs - Christina Skye in trouble - Part 1 of 2 - Female bondage
Michele James is arrested at home part 1 of 3 - Playing with handcuffs