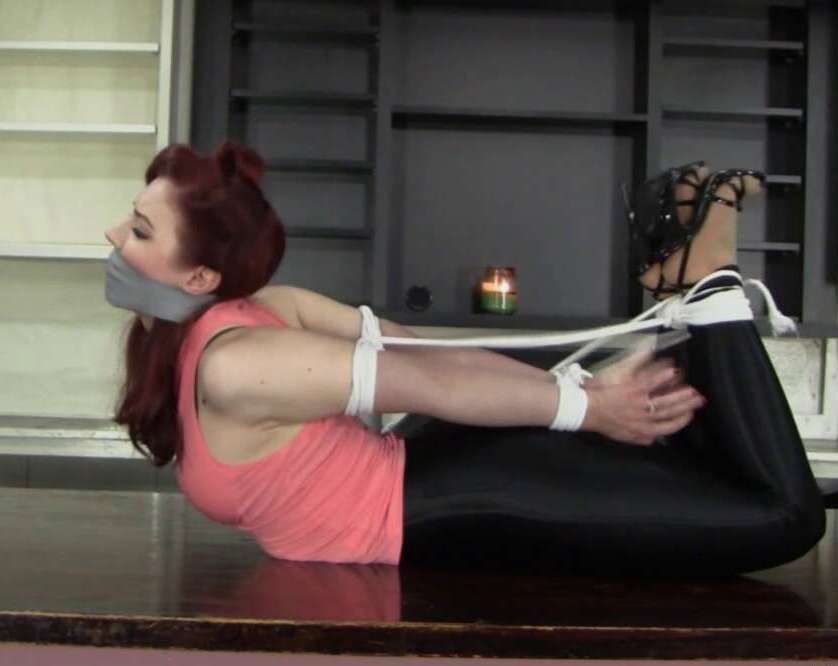 Ludella was feeling pretty down in the dumps, her boyfriend had dumped her and she’d gone to the bar dressed in some really sexy disco jeans, some very high heeled sandals and a very sexy top. Unfortunately for her there wasn’t anyone there at the bar and she tried to get some sympathy from the bartender. The bartender however had very little in the way of sympathy and a very large amount of rope instead. He grabbed her off the stool and she realized suddenly she’d shared too much with someone that she knew very little about. He quickly got her arms roped up first at the wrists then at the elbows and Ludella realized she was in a lot of trouble. He went back around behind the bar and grabbed some more rope when Ludella thought that she’d make an attempt to run for it. Sadly she was handicapped by her own footwear and the bartender quickly had her snatched back up and in a flash put her up on the counter. Her ankles then get summarily bound before the bartender stuffs her mouth with a white cloth and wraps some silver tape around her head. Ludella is roughly pushed over onto her stomach and then hogtied very tightly while the bartender tells her that he’s got to close the bar up and then he’ll be able to collect her and load her into his van so he can take her home for some personal and private fun. Locking the deadbolt on the front door of the bar he then retires to the back to close up. After Ludella fruitlessly struggles on the bar a bit the man returns and taunts her a bit before leaving her to struggle more on the bar showing off her very lovely ass in her very tight disco jeans. Finally the bartender returns after having managed to close up and unties her hogtie. Then walking around the bar he brings her down and bends her over across his leg appraising her ass and giving it some swats. Then her shirt comes up and exposes her bra. Ludella tries desperately to wiggle walk off but can’t manage to gain enough speed to really elude the evil bartender. He then XXXX her to walk a bit with her ankles tied a bit more to “show off her wiggle” ending with a lift and carry removing her from the bar and off to a destiny that includes a lot more tight bondage and gags. 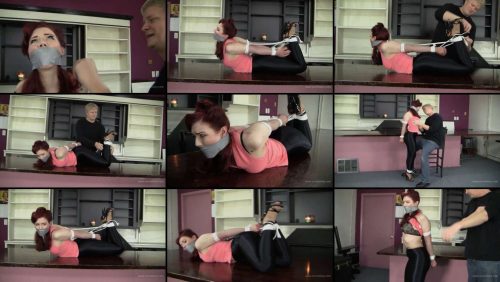 Suspension - Slyyy Hogtied and Hoisted - Shinybound - Huge ballgag, rope and sexy lingerie
Leather Bondage - Leather Bound Captive - Ashley - ShinyBondage
Bouncing my big tits up and down on him, bound and gagged! - Bondage M/F
found the lady next door bound and gagged! GNDB0475
Collared Sage vs. Her Great Escape - Hood,Leather Belts,Leather Armbinder for Leather Bondage
Serene Isley: Knee Point Nipple Predicament - Sereneisley - Strappado
Rope Bondage - Dolce - He has me tied up! And, I can't believe I just want him to fuck me! - GNDbon...
Rope Bondage - Kinky Secretary's Ride of Her Life!