She’d been warned many times. The news was filled with reports of break ins plaguing her neighborhood, and her mother had pleaded with her to move to a safer town, but Jeanette was stubborn….and careless. She soon found out, however, that both traits carried a high price! When the man appeared behind her and clamped a hand over her mouth, she instantly knew that all the warnings she had received had in fact been very prescient! Now, she was tightly bound, anchored to her bed with what seemed like miles of rope and tape, ensuring there was no way she could escape. Her captor wasn’t much for small talk, and he ensured she wouldn’t be making any either by stuffing her mouth, yanking a pair of pantyhose over her head, and sealing the entire mass shut with circuit after circuit of sticky tape! As her mouth was fused shut and the pressure built, she was horrified when the tape began to wind itself around and around her eyes! Now unable to see, speak or escape, she was left to grunt and struggle on her bed while the assailant robbed her blind. She was left there for hours, and after what seemed like an entire day of fruitless struggling, she collapsed in exhaustion. She could only pray for a rescuer to arrive and release her! Finally, her prayers were answered! Her roommate returned home, but he had spent the evening celebrating with the boys, and could barely see straight, let alone notice her plight! Toddling off to bed, he left Jeanette tied and gagged as she grunted in fury! It was the beginning of what looked like a VERY long night! 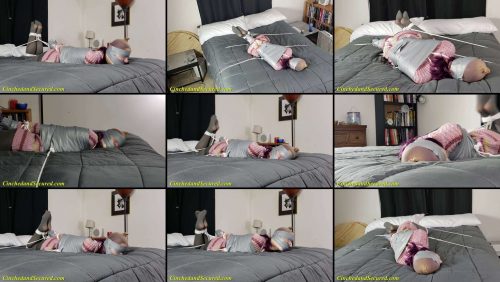 Rope bondage - Minuit and Sasori in the bedroom - Xtremely-tight bondage video
Sensual Bondage - Ava Minx is Cinched and Secured with Tight Crotch Rope - Ava’s Silent Submission
Tape Bondage - Derek Sinclair is gagged - Tape her up and stuff her in the closet
Rope Bondage - You better tie me up or I will call the cops - HunterSlair
Rope Bondage - Twelve Days Of Christmas Superstars Of Bondage - Boundinthemidwest
Sandra Silvers, Whitney Morgan and Lisa Harlotte - See-Through Pallet Wrap & Plenty o' Orgasms i...
Rope Bondage - Car trouble leads to terror - Bondage M/F
Rope Bondage - Tie me up tight and watch me wiggle out of my skirt!