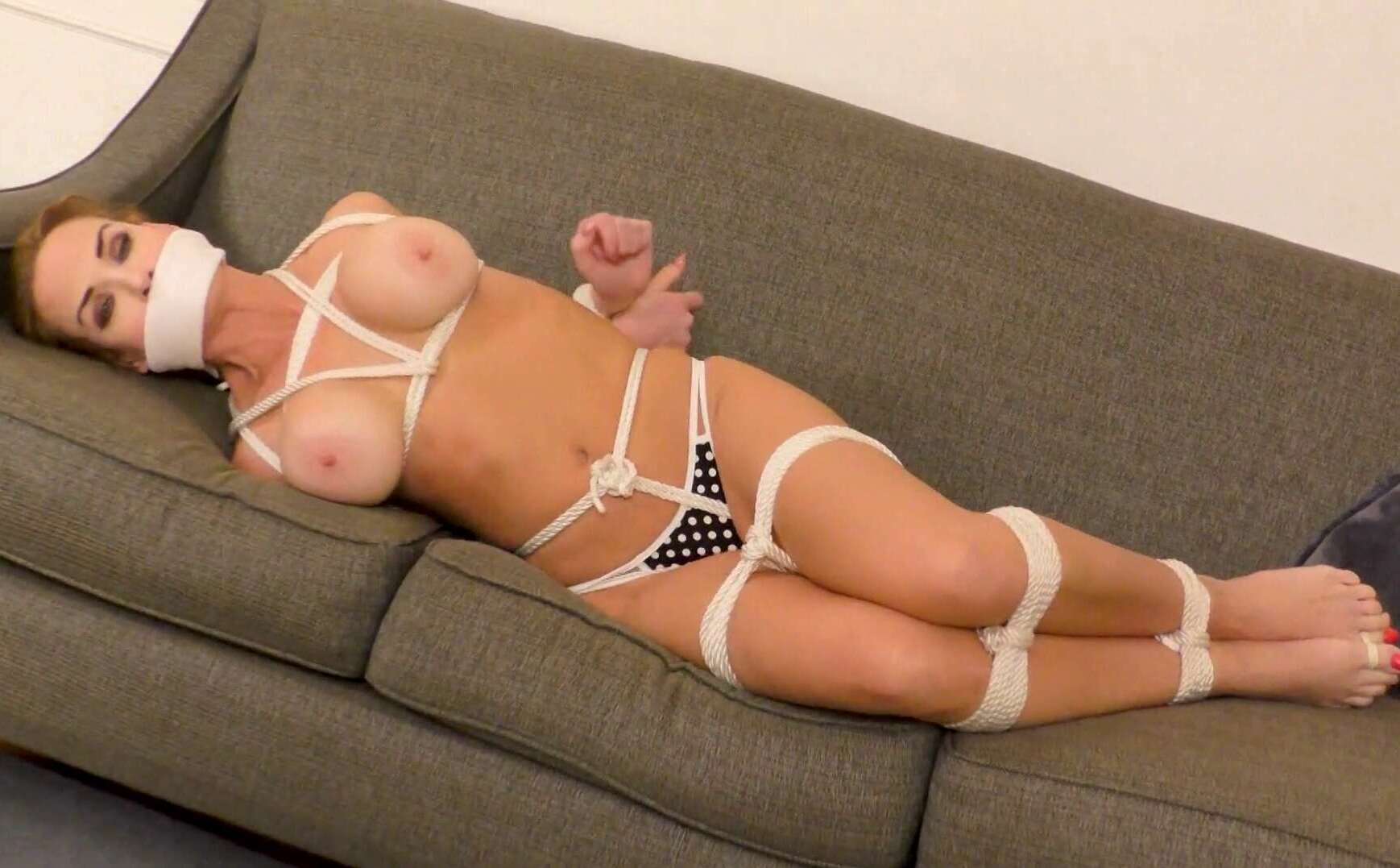 Treacherous beauty Alexis Taylor has a devious plan to rob a mansion, but her scheme doesn’t quite go as expected. The busty babe is dressed only in a skimpy bikini when she gains illegal access to the house, and she lets her ski-masked confederate in to crack open the safe. Once the black-clad crook sees how much money is in there, his greed compels him to immediately dissolve their partnership. He grabs Alexis hand-over-mouth and proceeds to bind her in a classic tie (all tying is shown on-screen).

The villain silences his former co-conspirator with a detective gag (also shown on-screen), and he takes advantage of her helplessness to indulge in some fondling of her enormous breasts and luscious backside, much to his buxom captive’s indignation. The double-crossing crook then goes to collect more loot, and Alexis struggles in vain to extricate herself from this mortifying fiasco.

Before long the masked burglar returns to check on the hoodwinked hottie, and he removes her bikini top. He ties a secure crotch-rope on Alexis, then uses some string for a humiliating toe-tie on the vanquished villainess. The randy rogue can’t resist indulging in some more fondling before leaving her to helplessly struggle while he continues to ransack the estate.
When the villain returns a final time to check on Alexis, he bends her over the sofa to engage in some playful if humbling spanking on the trussed up vixen, much to her chagrin!

The creep then takes a bandana and ties a “bandit gag” over Alexis’ detective gag, and he leaves her to be found by the owner of the mansion while he makes a clean getaway. The luckless lady fights against her restraints but it’s obvious she can’t get away.

Later Alexis is, indeed, discovered when the burglar’s victim returns home. He allows her to get dressed (in a minidress and high heels), but instead of turning the wayward wench over to the authorities he ties Alexis up again on a stool in a cleaned-out room. She spins an unconvincing tale about how she’s really the victim, and her new captor ends her lame excuses with a microfoam tape gag.

Alexis struggles and moans, and tries to use her feminine wiles to make him reconsider his actions. But instead of letting her loose, the wronged homeowner exposes her luscious breasts. Poor Alexis is finding out the hard way that there’s no honor among thieves and for her, crime really doesn’t pay!…