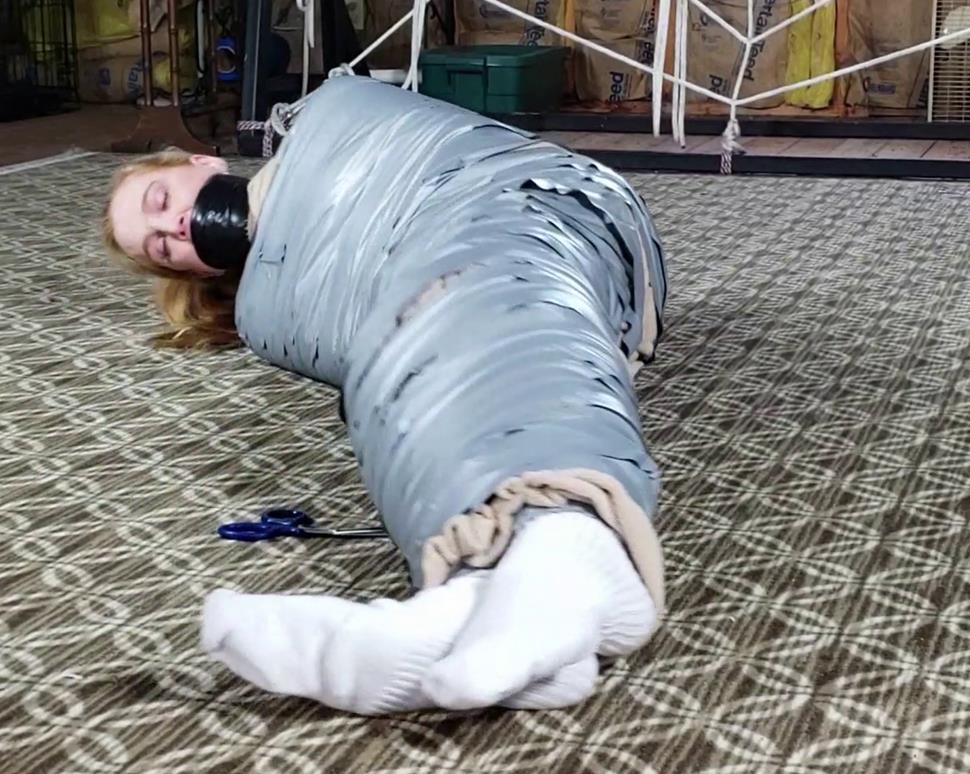 Ariel awoke in the attic, confused and disoriented. She had no idea how she had gotten there or what happened, but as she quickly took stock of her surroundings, she knew she was in trouble! The tall British beauty had been bound quite thoroughly, wrapped tightly in a stiflingly hot blanket, and cocooned in what seemed like miles of duct tape.

As she began to call for help, her husband appeared, giving her a moment of relief. Her husband surveyed his handiwork, telling her that he had been harboring a gambling addiction and had secretly amassed tens of thousand dollars in debts to local mob figures! The only way to clear the debt was to transfer the house to the mob, but in order to take care of the vig, he needed to offer something special: Ariel herself!

As he stuffed the frightened, angry girls mouth and sealed it shut with more tape, he explained how they’d sell her overseas to clear his debt, but that the transfer and sale wouldn’t take place for a few days, during which time she’d be left mummified in the attic! Ariel went ballistic, screaming into the gag and struggling like mad in blind fury and panic.

But her husband was, after all, a gambling man and had one final bet: that she wouldn’t escape! He left a pair of scissors behind, and Ariel squirmed and wriggled like a worm as she tried to reach them, but even if she could, how could she free her hands to cut away her packaging? Sadly, she realized that her husband, like all good gamblers, had hedged his bets! 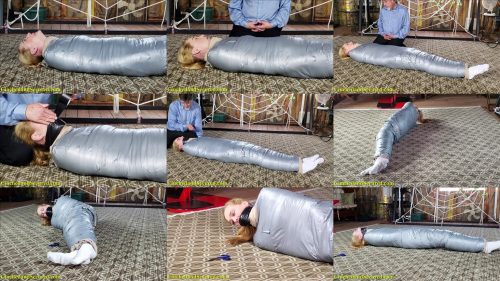 Star Nine struggles bound and gagged with ropes gndbondage – My husband is gone! You can come out n...
Ashley Lane and Chrissy Marie struggle to escape - Trapped In Imprisonment - The girls is tigtly ro...
Borderlandbound - Tasha and Callista: We Ordered the English Breakfast - Not the Continental Hogtie...
Lewrubens - Sarah Brooke is bound with metal collar -- The Interrogation of Sarah Miller - Rope bond...
Rope bondage - Shinybound Ziva Fey is tied with a tight rope up - Chairtied in her leotard
Rope Bondage - Rachel Adams Tight Hogtie – Unwilling Retirement - Poor girl is grabbed and gagged, ...
Tape bondage - Sarah Brooke a time for goodbyes - Lewrubensproductions - Rope bondage
Cupcake SinClair bondage is totally helpless – You’re just gonna have to keep me bound and gagged! G...