They’ve been snooping around up at Jack o Lantern’s Orchard, on the trail of rhino horn smugglers. Intelligence has it (there is a little here) that the crooks are using a disused (get it?) house near the old appley-arena as a base from which to ship their stuff.

Nobody is to interfere, which is exactly what intrepid sleuths Lacey and Chloe intend to do now! Getting captured has proven par for the course and our two beautiful young detectives are roundly herded inside and up to a second floor room. Here the mouthy bitches are forced to strip naked (come on, brats, give us your best pouts) and are then trussed up with silver tape.

Strips of same are slapped over their mouths (they think they are regular comedians these two, and appear unconcerned of their peril). That all changes once they are gagged up. Now they know it is the real deal. Both mmmmpppphhhh hotly into their sticky tape gags while they are fondled and left to squirm!

The guy who has them decides that next they must endure some more extreme silencers. No telling who else might be sniffing around down there and the pair of detained girls should not be heard. With that, he plugs their incessant yappers with thick socks and methodically binds (skin tight style) their widely stuffed mouths and heads with many turns of strong white tape… 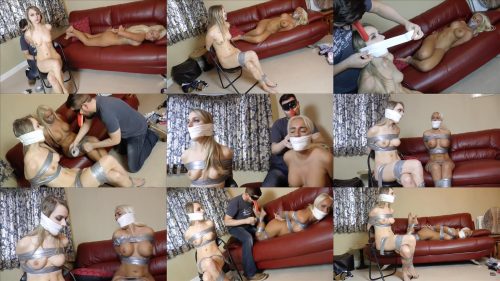