Jackie Wallace is an adorable Filipino cutie. She is wearing a cute outfit of a silver satin blouse and leather shorts. While she is in the middle of a phone call she gets suddenly interrupted when a stranger grabs her from behind and handgags her to prevent her to scream, this guy is a robber who has been breaking into the houses of the neighborhood, but this is the first time he finds a person in the house he is robbing. The robber knows what he has to do, in order to prevent Jackie to escape and call the cops, he must tie her up, so he produces a roll of duct tape and ties Jackie’s hands behind her back. Then Jackie gets her body and legs tied up with duct tape as well. The intruder knows Jackie will scream for help as soon as he leaves so he gags Jackie with some strips of duct tape. Completely helpless, Jackie struggles trying to break free but the duct tape is very tight. She will stay there all tied up and gagged until somebody finds her and untie her, she is not really worried about the money the bad guy will steal but she knows it’ll be so humiliating when her roommate finds her tied up and gagged! 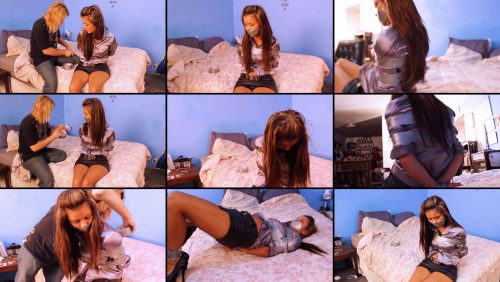