Sahrye and her partner are up to “NO Good” And, they would probably get away with it, if it weren’t for news reporter Annabelle Genovisi sticking her nose where it don’t belong. So the two come up with a plan to get rid of nosy news reporter. To lure Annabelle, the man ties Sahrye up and gags her. She then uses the video feature on her cell phone to call Annabelle and beg her to come over to help her. Annabelle falls for the trick and short time later, she shows up. But after she unties Sahrye, the man comes out of hiding. He covers her mouth with his hand and holds Annabelle down so Sahrye can tie her up.

Then since Annabelle refuses to be quiet, Sahrye stuffs her mouth with a pair of her panties so the man can then tie a rag between her teeth to gag Annabelle. With the reporter now tightly bound and gagged, Sahrye is left to watch over her. Now alone with Annabelle, Sahrye starts to torment her. After a short while, she decides to also humiliate her by opening her blouse and pulling her bra up to expose her boobs. But that is only the beginning. Because Annabelle cannot stop her as Sahrye pulls her pantyhose and panties down. Then just when she thought it couldn’t get any worse, the man returns and hogties Annabelle. As he does this, Sahrye uses her cell phone to shoot photos of the hogtied, gagged and completely exposed news reporter. 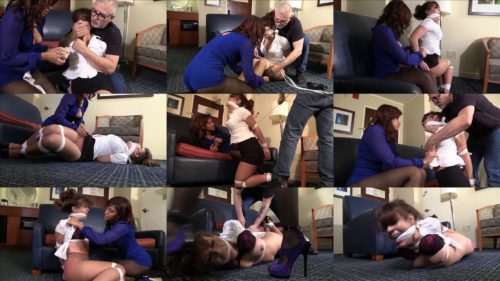