Nyxon gas found some scandalous sexts between her husband and their babysitter, so she invites the young lady over for a chat. Dacey sits down on the couch, and Nyxon hands her a drink. She sips it while Nyxon gives her the rundown about why she invited her over.

Dacey vehemently denies the accusations, but Nyxon knows the truth. Dacey begins to feel a bit woozy, and she passes her glass to Nyxon before slumping over on the couch.

The next scene has Dacey tied up tightly with rope, and Nyxon sitting next to her. Dacey’s eyes flutter open, and she immediately starts to struggle to get loose. Nyxon takes her photo, then shoves a ballgag into her mouth. She tells Dacey that her and her husband will no longer be needing her services, then leaves her to struggle. 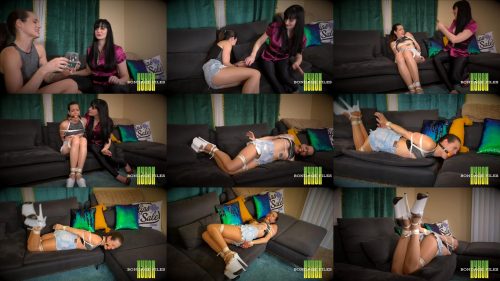