Elizabeth is dragging Serene into the room roughly by her cuffed wrists. She attaches the cuffs to the boat winch and starts messing with her a bit. She grabs a leather strap and cuffs her thighs tightly together. Coming back in she takes another strap and attaches it to her ankles roughly. A close up view of her wedge heeled feet shows her toes to be the only thing still in contact with the cold, hard pavement. She leaves to get something and leaves poor Serene dangling from the hook. When she returns she has a large black ballgag which Serene immediately protesting. Elizabeth roughly shoves the ballgag into her mouth and straps it all the while telling her that .You’re mine”.

She grabs a flogger and starts slapping her ass repeatedly while Serene cries out from the repeated blows. After a while Elizabeth exits after one last rough slap her boot heels ringing out as she struts away. Serene struggles trying to find some slack in her wrists but can’t manage to before Elizabeth returns flogger in hand. She taunts her a bit before leaving her dangling by the hook again.

Serene twists and turns trying to again find some slack to somehow get herself out of this situation but all her efforts are in vain and Elizabeth turns and lays into her with a vengeance with her flogger. Serene’s calves start to quiver with strain of being held on her toes for so long. Elizabeth begins torturing her with repeated blows of the flogger almost out poor Serene’s cries. Serene is just beginning her stay as Elizabeth’s toy. 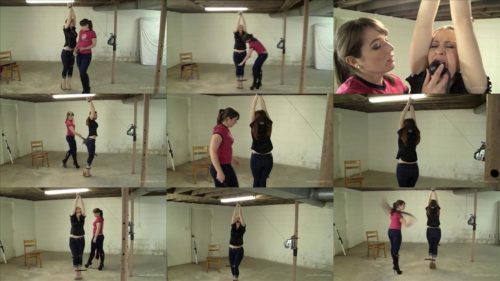