Nyxon throws a tantrum, then grabs GiGi. She places her hand over GiGi’s mouth and leaves it there until GiGi goes limp on the couch. When GiGi opens her eyes, she finds herself tied tightly with rope.

Nyxon gives her one more chance to fudge the paperwork, and when GiGi still refuses, she places a ballgag into her mouth, pulling the strap tight. GiGi screams through the gag and starts to struggle. Nyxon just laughs and leaves GiGi there to struggle until she changes her mind. 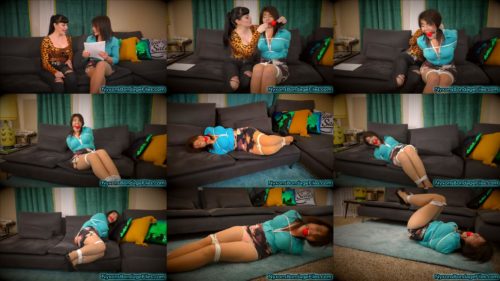